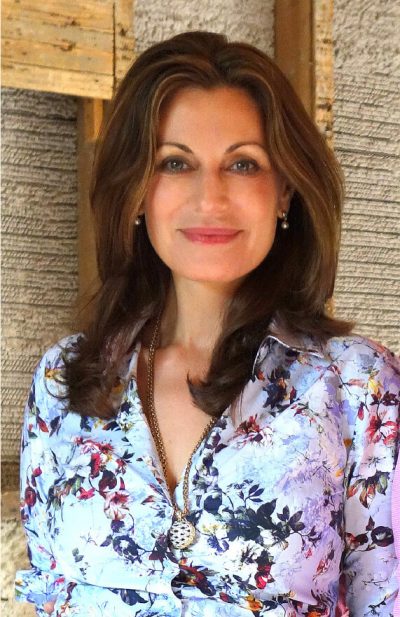 Marina Killery was born in London to artist parents and began painting and drawing at a very early age. She majored in art and art history throughout her academic career, and attended the prestigious St Martin’s School of Art in the late 1970’s, where she studied painting, sculpture, and design.

Drawn to the sculptural nature of hat design, Killery went on to study millinery, and in the early 80’s started her own business making couture (bespoke) hats for London society, including Diana, Princess of Wales, who was one of her most loyal clients.

Her millinery creations made regular appearances in Vogue and other leading magazines, and in 1988 her work was exhibited in the show, “Fashion and Surrealism” at the Victoria and Albert Museum in London, and The Fashion Institute of Technology, in New York.

Killery moved to New York in 1994, and established Marina Killery Couture Hats Inc., selling all over the United States, London, Paris, and Tokyo, in stores that included Neiman Marcus, Harrods, and Harvey Nichols. In 1998, Killery sold the hat business and applied her talents to other areas of design, while continuing to draw and paint. In 2000, she began to focus entirely on painting portraits. Marina Killery works in oil paint on canvas, using the techniques of classical portrait painting.

Killery’s career as a designer and fabricator of couture millinery, and working with her clients on a one to one basis, has provided her with a unique skill that enhances her portrait painting.

“I have spent my entire creative and professional life looking at faces”, she states. My work in fashion has given me an edge with my portraits. I understand color and composition, not only from the perspective of a fine art painter, but also as a couturier. I know what will flatter and enhance my sitter, what extraneous elements will add dimension and interest to the painting, and say something about who my subject is.”

Given that people have little time and patience nowadays, to sit for a portrait in the formal sense, Marina Killery works mostly from photographs. She is very particular about the clothing choices of her sitters, and spends time with them selecting pieces that will work best in the composition. She styles and directs the subject and takes about 200 photographs.

“My style of portraiture is rooted in the traditions of classical European painting, and just as in classical painting, it is not just the likeness that tells us who the person is. Whether it is the subject’s attire, or the bright yellow chair they are sitting in, detail is a clue, and will tell a story.”

Although Marina Killery works from photographs, her portraits do not look like photographs. “I detest photo realism; what is the point? You might as well get a beautiful photograph taken and forget about the paint! I believe that a painted portrait should have the character of the process as part of the package.”